ZetrOZ Systems is an FDA cGMP and ISO 13585 medical technology company headquartered in the southern coastal region of Connecticut. The organization also has manufacturing facilities across the United States. ZetrOZ Systems produced UltrOZ®, sam®Sport and sam®Pro 2.0 to provide safe and effective treatment options for prevalent conditions such as arthritis. Learn more at zetroz.com and samrecover.com. 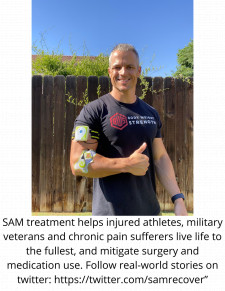 TRUMBULL, Conn., June 29, 2021 (Newswire.com) - Years ago, George Lewis, Ph.D., founder, President and CEO of ZetrOZ Systems, could see that wearable medical devices were the wave of the future. Dr. Lewis, a Presidential Life Science Fellow and National Science Foundation Fellow, conducted research at Cornell University in the early 2000s, investigating the maximum amount of ultrasound that can be safely delivered. The result, Sustained Acoustic Medicine (sam®), was found to be capable of altering the trajectory of soft tissue cells to stimulate remodeling and healing. Dr. Lewis formed ZetrOZ in 2008, following up with the company's first ultrasonic portable device in 2009 and the first clinical study from 2010-2012.

Initially commercialized for the veterinary market in 2010, the company's product—ULTROZ—was used to heal soft tissue injuries in dogs and horses. That pathway generated basic science evidence and commercial revenue, which led to the creation of the human version of the product, a process that included clinical trials and FDA approval in 2013. By 2014, ZetrOZ had pivoted to exclusively serve the human market, building on an existing low-intensity pulsed ultrasound medical technology called Exogen®. Their flagship product, sam®, is an in-home, ultrasound treatment that reduces the need for pain medication and surgery. sam® Sport is the first and only FDA-approved wearable device for multi-hour continuous ultrasound therapy. A long-duration ultrasound device, sam® has been validated in over 30 clinical studies with over 300,000 patients treated successfully. sam® 2.0, launched in 2020, can be attached to various parts of the body and requires no care providers as it can be applied by patients in their homes.

"I am proud to be part of a company that has spearheaded efforts to drive sustained acoustic medicine devices to the market so that millions of suffering patients worldwide can achieve accelerated healing and sustained relief long-term," says Dr. Lewis. "Our hardworking team has persisted through the years and has developed an unparalleled product family that is helping to improve the quality of life for those who suffer with pain."

The first generation of sam®, made for veterinary use, was configured such that all of the electronics were housed in a single battery pack. The wires ran from the battery to an ultrasound device that was attached to the animal with bandage gauze; then the product evolved into a battery wrapped in neoprene for the lower extremities. From there, ZetrOZ began focusing on human patients and made wraps for elbows, shoulders, and knees, eventually teaming up with 3M to achieve a high-end adhesive bandage for on-the-go patients. The results, sam®Sport and sam® 2.0, are sophisticated, ultrasound wave-generating devices with a micro-USB recharging battery pack and real-time autonomous monitoring.

With sam®, the ultrasound radiates directly into tissue at approximately 5 to 10 cm deep and can achieve a therapeutic dosing area that is the size of an orange or baseball.

Because pain can last, patients need products they can rely on. With ZetrOZ, patients can rest assured that its products have been manufactured to the highest standards (cGMP & ISO 13585), with even the sub-units (circuit boards, ultrasonic transducers) made in the U.S. Each ultrasound transducer and controller is individually calibrated and tested in the U.S.

A product that has evolved from user feedback, sam® offers patients the ultimate in self-care: clinically proven, wearable, drug-free, non-invasive devices that deliver long-duration, low-intensity, continuous ultrasound to wounded tissue. And sam®, backed up with research funding from the National Institute of Health, the National Science Foundation, the Department of Defense and NASA, is manufactured in the U.S. to the highest standards.

About ZetrOZ Systems
ZetrOZ Systems is an FDA cGMP and ISO 13585 medical technology company headquartered in the southern coastal region of Connecticut. The organization also has manufacturing facilities across the United States. ZetrOZ Systems produced UltrOZ®, sam®Sport and sam®Pro 2.0 to provide safe and effective treatment options for prevalent conditions such as arthritis. Learn more at zetroz.com and samrecover.com.

Get notified about new releases.